Just south of the centre of Timberscombe, in a secluded valley, lie the crumbling ruins of a small settlement called Clicket. 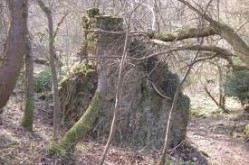 All the above pictures © Copyright Ian Wigley and licensed for reuse under this Creative Commons Licence.

The medieval origin of Clicket farmstead is implied by the Lay Subsidy of 1327 and it is shown as a small settlement on the Tithe Map of 1844.

Up until the end of the 19th Century it was a thriving community. It had a mill that serviced local farms and several quarries that provided lime, but by the start of the 20th Century it had been all but abandoned and there were just three people living there.

The lime quarries were situated on what is now Allercott Farm and two lime kilns still survive.  At SS 9625 3920 is a kiln built into a bank which is in poor condition. At SS 9610 3920 is a kiln in good condition with typical stepped front retaining wall. The kiln was served by a tramway which terminated at the kiln head. Some rusting sections of rail can still be seen at the top of the kiln. Typically a kiln took a day to load, three days to fire, two days to cool and a day to unload.

Clicket had no church, shop or school and residents would have travelled to nearby Timberscombe or Luxborough for church services. A large house in Clicket was reputed to have been used for meetings, religious or otherwise. A Bible Christians magazine mentions a congregation of 70 at one gathering.

School children had a difficult walk through the valley to Timberscombe, sometimes in poor weather. In snow, travel must have been arduous, and possibly dangerous. Attendance of some of the children at school was sporadic, especially at harvest time when they would have been expected to help out.

Towards the end of the 19th century economic changes affected many rural communities. Competition from more efficient mills making use of mechanisation, coupled with Clicket’s poor access without carts, meant that the mill was abandoned by 1900. Most of the villagers had already left to seek a better life elsewhere.

The image below is reputed to be a photograph of the last residents of Clicket taken c1890. The man on the right of the image is wearing an apron and a watch on a chain, suggesting he could have been the miller.  The man sitting front left with a dog on his lap has a basket of tools at his feet, suggesting he may have worked in the village quarry.

Click on this link to read a 6 page pamphlet entitled “CLICKET, A CO-LOCATION OF HABITATION” by Richard Sandover

The Allerford Museum also has a 4-page document entitled ‘Clicket – Lost Hamlet in Somerset’ which was compiled by a John C Robins in 2002.

1841- Census shows two families living in Clicket, both with the surname Williams:

(Nb Some names in the Timberscombe census are the same as those living in Clicket so it seems likely that there was an overlap in the records.)

1851- lists the residents of Clicket as:

1861- lists the residents of Clicket as:

Second family are James’s parents, John Coles 60, Elizabeth 58 (as in 1851).
George Floyde and his wife Mary were living at Thorne with grandson George aged 12.
William 41 and Betty Taylor 56 with son Edwin 13 were living at Woodlands which is listed under Clicket Mills.

James Coles 56, Mary 53, William and Elizabeth are living in Clicket and have a 14 yr old servant George Greenslade.

1901– lists the residents of Clicket as:

The last people to live in Clicket, albeit unofficially after it had been deserted, were an elderly couple. Desperate to avoid going to a poorhouse after being evicted from their cottage, they moved into the derelict mill despite it having no windows or doors. It is thought that the woman had no choice but to go to the poorhouse when her husband died about a year later.

If you can add any information to this article or find any errors please contact me using the contact page.