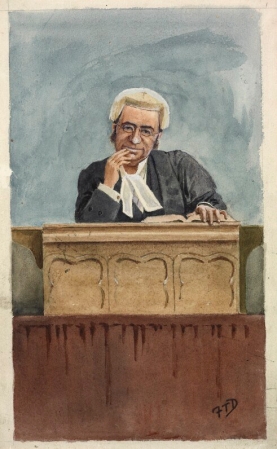 Sir George Farwell (1845 – 1915), a past resident of Knowle Manor,  was an English judge remembered particularly for trying the Taff Vale case. The Taff Vale case greatly influenced UK labour law. His judgement ruled that unions could be held liable for the costs of industrial action. His decision, though reversed by the court of appeal, was upheld in 1901 by the House of Lords. His ruling led angry trade unions to form a committee which went on to become the Labour Party who swept to victory in 1906. The decision by Lord Farwell was reversed by the Trade Disputes Act 1906.

Farwell was born in Codsall, Staffordshire, the second son of Frederick Cooper Farwell, agent to the Duke of Cleveland. He was called to the bar in 1871. In 1874 Farwell published A Concise Treatise on the Law of Powers, which was quickly accepted as a standard work on the subject.

In 1891 he became a QC and in 1895 a bencher of Lincoln’s Inn. In October 1899 he was appointed an additional judge of the Chancery Division and was knighted. In 1906 Farwell was made a Lord of Appeal. He resigned the position in 1913.

Farwell was a generous contributor to the Timberscombe Reading Room, which used to lie in the area where the telephone box is now situated. The Reading Room minute book records that, “Sir George Farwell, Lady Farwell and Miss Farwell (of Knowle) had most generously agreed to provide the balance of the cost”. This amounted to almost half of the total required to build the Reading Room. The reading room was formally opened by Sir George Farwell’s daughter Miss Farwell in 1913.

Just before entering the church on the left is a marble headstone in memory of Lord Justice Farwell.