In 2013 I was contacted by Jay Stephens who lives in America. Jay had purchased what he believed to be an 18th Century grandfather clock bearing the name William Birth , Timberscombe. He asked if any further information was available regarding William Birth to confirm this information.
The genealogical records for Timberscombe and the surrounding area show three William Births around this time period, two of whom died whilst still quite young. I, therefore, believe that the correct William Birth was born in 1738, son of Robert and Mary. He married in 1767 and had at least three children. The following information and photographs have been taken from an e mail supplied by Jay Stephens in 2018.

“I believe I purchased the clock in 2001 on German Ebay. The seller was actually in Austria. My son was attending the Winter Special Olympics in Berchtesgaden and the seller met my wife there with the clock. Its first ride home was actually on a bus.

The clock travelled back to the States twice and once to Germany after purchasing it
and once I finally settled here in Arizona I could not get the clock to run consistently.
Long story short I rather sheepishly have to admit that having inserted a quartz
works at my wife’s request although I have all of the original parts of the clock works. 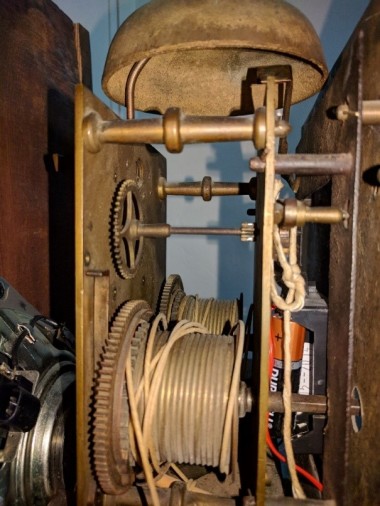 The internal workings including the modern day battery! 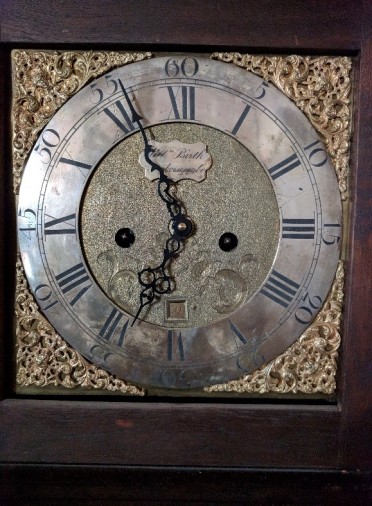 The internal workings of the clock

At one time I think I submitted it to the British Horological Society for an honest opinion of the age, etc. I believe they did think that the clock was from the 1700’s, but the clock case was not the original one for the clockworks. If you saw it you would agree. Someone has added a “newer” frame around the clock face to make it appear that the clockworks “fit” the case better. I believe the BHS also stated the clock case was typical of the 24 hour Grandfather clocks common in the 1700’s. The clock case measures 76.5″ high x 16.5″ wide x 9.5″ deep at the base. The face of the clock measures 10.75″ square. The clock base is made from what we would call “tiger oak” and the clock hood appears to be from the same wood as the base but the opening has some mixed wood in it. The base door has an unusual inlaid star design in it and other that the inlaid outline in the door and base the clock case is very plain. The top of the hood was just a flat piece of wood, so I had a carpenter add a more decorative piece at the very top.”

Does anybody know of any further William Birth clocks?

If so please send me some pictures and any information you have on the clock.

Since writing this article we have discovered a second William Birth clock, in full working order, in Porlock. We are awaiting further information on the second clock.